Help is on the way for structural engineers driving toward improving the efficiency, reliability and resilience of buildings through performance-based wind design. And though it could take a decade or more for PBWD to become mainstream for practitioners, the authors of the first two PBWD documents, both debuting this year, are hailing them as milestones.

“PBWD provides the opportunity to engineer unique structural systems for buildings with atypical shapes or aerodynamic characteristics that do not fit the constraints of the prescriptive code-based wind-force resisting systems,” said Donald R. Scott, a senior principal at PCS Structural Solutions, at Structures Congress 2019. The conference, organized by the Structural Engineering Institute (SEI) of the American Society of Civil Engineers (ASCE) and held April 24-27 in Orlando, drew 1,058 registrants.

Scott is the principal investigator leading the team of 14 structural experts writing the Prestandard for Performance-Based Wind Design, the first document ever produced to aid in PBWD. Five peer reviewers are currently pouring over the final draft. The ASCE/SEI document, underwritten by a $150,000 grant from the Charles Pankow Foundation, will be available on the Pankow foundation and ASCE/SEI websites for free download by the end of July.

The publication is intended as a precursor to a PBWD standard that would eventually be incorporated into the model building code—giving designers a code-approved alternative to the prescriptive, or cookbook, provisions of the code.

The publication describes aspects of wind design and performance that many codes do not specify, according to Preetam Biswas, an associate director of Skidmore, Owings & Merrill and chair of the task committee. The writers of the manual and the prestandard are coordinating their work, he said.

The draft of the manual is 95% complete and expected out in digital form by the end of the year. A print version should be available at Structures Congress 2020, April 5 to 8 in St. Louis.

Momentum is building for all types of performance-based design, which is a sophisticated engineering approach that relies on advanced analytic and design methods to enable engineers to reliably predict behavior of a structure when it is subjected to any defined loads, whether wind, seismic or fire.

The only way to get approval for a PBWD is to go through the alternate means and methods provision of the code. Few want to do this because building officials, unfamiliar with PBWD, are reluctant to approve the designs. In addition, a PBWD will require peer review. That translates to a longer and potentially murkier approvals process, which gives many building owners pause.

PBD in any form “requires specialized expertise or knowledge,” said Ronald O. Hamburger, a senior principal at Simpson Gumpertz & Heger and the father of the 20-year-old performance-based seismic design (PBSD) approach for building retrofits. “It is not for everyone,” he added.

Engineers agree that for PBWD to proliferate, there is much work to be done educating not only engineers but architects, developers, other stakeholders and especially code officials as to the potential advantages—and risks—associated with the approach. The guidelines are intended to help establish prudent means of practice and provide some protection, in terms of legal liability, for the predicted performance, said those involved.

Benefits of PBWD will be abundantly clear to many practitioners and owners, yet others may need to be convinced, chorused the authors of both documents. For starters, owners and designers need to be taught that the performance of designs produced by following the prescriptive requirements of the building code may not be sufficient, said Scott.

“Many project stakeholders believe that if their building is designed using the provisions of the building code that it will survive all wind events and remain operational; however, the building code is only based upon requirements for life safety,” he added.

Educating stakeholders on the benefits of paying a bit extra up front for buildings to achieve a desired and better performance in wind events—such as continuous operation to avoid business losses after wind storms and hurricanes—is similar to the hurdles faced by those who introduced performance-based seismic design, which is now mainstream design practice around the world, Scott said.

Challenges aside, Ron Klemencic, the father of PBSD for tall buildings, calls PBD “fun. You get to use physics, mathematics” and more to produce better buildings, said Klemencic, chairman and CEO of Magnusson Klemencic Associates (MKA).

“For PBSD, we did it first and then wrote the book. For PBWD, we are writing the book and then doing it,” added Klemencic, who also is a director of the Pankow foundation.

The documents introduce the use of nonlinear dynamic analysis for wind design, limited nonlinearity in the main wind force-resisting system elements, system-based performance criteria and substantial performance requirement improvements in the building envelope.

The prestandard describes three possible methods to implement PBWD. The methods vary in their complexity and rigor. The simplest requires only a modest amount of the sophisticated nonlinear response history analysis, said Klemencic.

Specifically, the prestandard will present a recommended alternative to the prescriptive procedures contained in the nationally adopted standard, Minimum Design Loads and Associated Criteria for Buildings and Other Structures (ASCE/SEI 7), and the International Building Code. The intended audience for the prestandard includes structural engineers, architects, building component and cladding specifiers/designers, and building officials engaged in the wind design and review of buildings.

Properly implemented, the document will result in buildings that are capable of reliably achieving the wind performance objectives specified by ASCE/SEI 7, and in many instances, superior performance, said the authors. “Individual users who possess an understanding of wind engineering may adapt and modify the provisions of the prestandard to serve as the basis for designs intended to achieve higher wind performance objectives than specifically intended,” says the final draft.

An additional benefit, PBWD allows for the resolutions of conflicts that can occur in the design of buildings that are subjected to multiple hazards. For example, a conflict can be created when using both PBSD provisions and code-based prescriptive wind provisions for the design of tall buildings, said Scott.

Seismic effects will control the design of the lower levels of the building, while wind effects will control the upper levels. Because wind provisions require that all elements of the structure remain elastic under wind loads—and return to their preloaded condition—the benefits of PBSD provisions that allow for selected elements, in rare events, to go inelastic—and not spring back 100%—may not be able to be achieved. That conflict lessens the overall seismic performance of the building.

The use of PBWD, which will permit inelastic behavior, will allow for this conflict to be resolved and enable designs to improve the overall performance of the building, Scott said.

There are several aspects of PBWD that need to be developed further and tested on building designs before becoming standard provisions of ASCE 7, according to Jennifer Goupil, ASCE/SEI’s senior manager of engineering. The PBD task committee of the ASCE 7-22 wind load subcommittee is working to develop aspects of these types of designs.

The committee is studying 16 buildings to determine the applicability of the provisions of the prestandard and to develop an overall target system reliability for buildings designed using PBWD. One of the buildings is the 850-ft-tall Rainier Square Tower, engineered by MKA and under construction in Seattle.

This effort will need at least another year to complete and evaluate, said Goupil. After the research is evaluated and the profession is using the prestandard, "we can discuss the time frame for developing the standard," she said.

Meanwhile, just as the PEER TBI Guidelines for Performance-Based Seismic Design of Tall Buildings is used currently and accepted by many building officials, the goal of the shapers of the prestandard is that the PBWD approach will be similarly discussed with owners and building officials, explained Goupil.

The advanced analytic and design methods required to implement PBWD will challenge engineers to grow in technical capability, chorused the authors. Wind consultants will be especially challenged with an expanded workload as PBWD requires wind tunnel testing and the input of a wind engineer for loading histories similar to seismologists providing site-specific ground motion records for PBSD.

But Klemencic maintains that “PBWD is poised to be orders of magnitude more impactful than PBSD [because] many more buildings across the country and around the world stand to benefit from the methodology, which results in more efficient, reliable and resilient designs.” 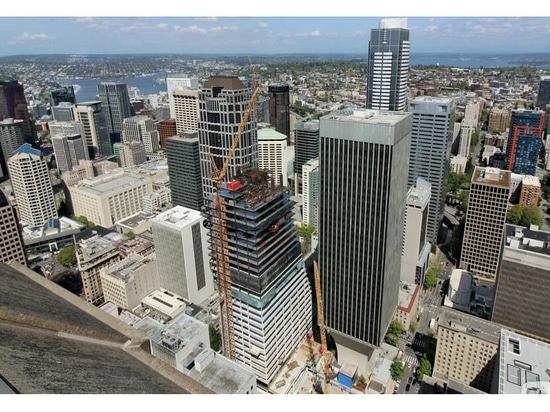 Rainier Square Tower, under construction in Seattle, is one of the buildings considered for the development of a performance-based wind design manual for tall buildings.