Contractors widening a 1.6-mile-long section of Interstate 75 in southwest Florida elected to build outside the box by using global-positioning technology to control two of the largest rubber-tired gantry cranes ever to work on a U.S. highway project

﻿Using GPS to guide a gantry, or straddle, cranes marks a first for a highway application, say executives at gantry-crane manufacturer Mi-Jack Products Inc., which supplied equipment for the Florida bridge project. Equally unusual is the size of the company's twin MJ-70 Travelift cranes, which feature clear spans of 84 ft, more than 20 ft beyond the typical width in this type of job, company officials add.

The innovation was born of necessity on the Florida bridge project, which involves adding two mainline lanes to the inside of a curving, 3,467-ft-long stretch of I-75 over the Caloosahatchee River. A joint venture of The de Moya Group and Leware Construction Co. needed the cranes to span the nearly 74-ft median gap between the existing twin-span bridge. Complicating matters was the section's 1° curve and 3.5% grade.

Known for their broader use in ports, precast yards and other industrial settings, gantry cranes found on road projects are often used on straight sections and sometimes ride atop temporary rails.

But installing rails along the curving, sloping structures wasn't a viable option, project engineers say. Furthermore, controlling the cranes on rubber tires proved to be a challenge. At first, bridge crews attempted to manually steer the machines but quickly found the task was too tricky.

"We bumped into the [barrier] wall a few times," admits Scot Savage, general superintendent with Leware. "They're just so huge … the operator's got a lot of stuff he's got to watch besides the load." Installing the GPS system "has made a world of difference," he adds.

As the project's workhorses, the gantry cranes are constantly in use. "You can't get enough time with it," says Savage. "I've got to make sure if we're taking a load out, we're bringing a load back."

Workers have used the gantries, for which the contracting team reports paying about $750,000 each, to receive all construction materials on-site. The approach nearly eliminates lane closures and minimizes the need for barging in shipments, team members add.

GPS was not the only modification added to the gantries. In some areas of the project, the units also deliver or retrieve materials, such as piling, on sites located more than 50 ft below the work deck. This action, however, required reducing each hook block's reeving to four parts of line from eight.

"By using only half the normal reeving, it allowed us the additional wire rope necessary to increase the below-grade capabilities while still maintaining the same drum capacity," says Jerry Studer, Mi-Jack's Southeast sales manager. He estimates the firm manufactures less than a dozen gantry units of any size per year for highway work, making this project unusual in more than one way.

Occasionally, the cranes have worked together. On August 7, crews performed tandem picks of six 84-ft-long precast concrete beams weighing roughly 69,000 lb each. Though each crane can lift up to 92,000 lb, other factors dictated using both cranes.

First, the method reduced the direct loads to the cranes, their rubber tires and the bridge structures by distributing the beam load across multiple spans. Picking the beams with a single crane would have required installing a spreader bar, while a tandem pick required no below-the-hook modifications.

"There's not much rigging involved," Savage says. "There's just one hook [on each crane] and a 55-ton shackle that screws right into the beam [at each end]— no other slings or anything else."

Within a couple of minutes during the tandem lifts, each crane operator had his respective hook connected to the shackle and lifted the beam up close to the units' 25-ft, 5-in. maximum hook height, to minimize load sway. Once both cranes drove onto the bridge structure, the operators only needed to concentrate on keeping the units moving in sync. GPS handled the rest.

The units were speedy, too. The contractor estimated three hours to place the six beams, but crews completed the work in two and a half, Savage says. 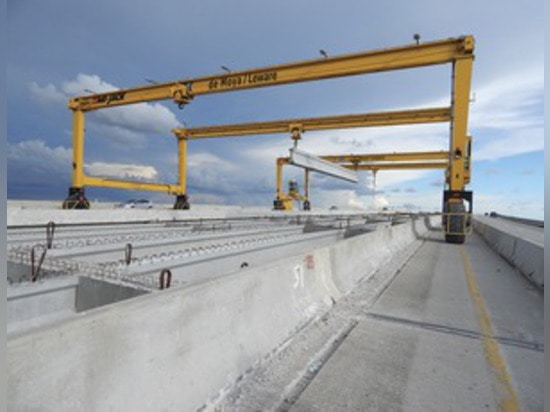 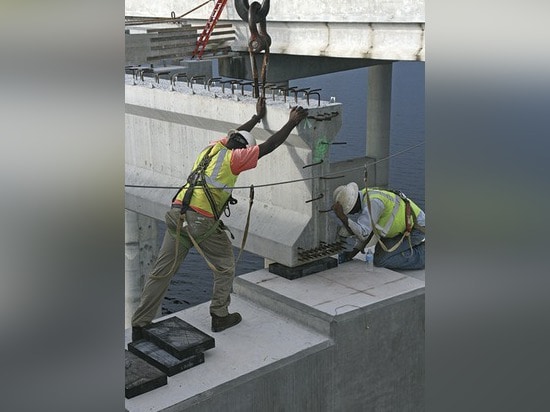 Photo by Scott Judy for ENR
*Prices are pre-tax. They exclude delivery charges and customs duties and do not include additional charges for installation or activation options. Prices are indicative only and may vary by country, with changes to the cost of raw materials and exchange rates.
Compare
Remove all
Compare up to 10 products