According to the planning application the facility, which is currently under construction, will process and manage up to 48,500 tonnes of biodegradable organic waste per annum.

The proposed capacity at the AD facility will be met primarily from commercial and industrial waste sources within 40 miles of the site such as schools, supermarkets, hotels, restaurants and food manufacturers.

The application said that the plant will also be capable of processing liquid wastes include compost leachate, waste cooking oils and drinks manufacturing waste.

Rainwater collected from on-site surface water attenuation and the harvesting of rainwater that falls on the roof of the reception building can also be used in the AD process.

Once complete it is anticipated that the plant will generate around 2.4 MW of renewable energy.

Mike Surrey, who’s overseeing the project, explained why Severn Trent is investing in the plant: “Just in our region, there’s 750,000 tonnes of available food waste every year.”

“At the moment a lot of this just rots away in landfill, with no benefit to anyone. However, when we’ve built this new anaerobic digester we’ll be able to generate electricity to power our sites and sell the extra back to the grid,” he continued.

According to Surrey the biogas facility should be operational by the end of the year.

“And this is only just the beginning,” alludes Surrey. “Once the digester at Coleshill is up and running, we have ambitious plans to roll out food waste plants across the Severn Trent region, and we’re looking at where we’re going to put the next two plants right now.”

“Each of these plants is expected to generate around 2%t of Severn Trent Water’s energy needs,” he concluded. 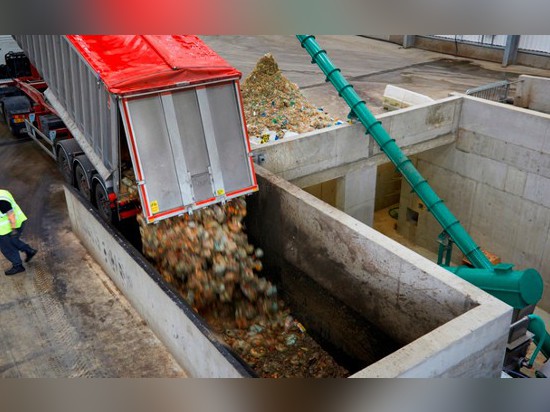