In Germany, buildings account for almost 40 percent of all energy usage. Heating, cooling and ventilating homes, offices and public spaces is expensive – and offices with huge glass façades are one of the worst offenders in terms of energy wastage.

During summer, these buildings begin to resemble giant greenhouses that take an enormous amount of effort to cool, while in winter heating requirements shoot up because of insufficient heat insulation for the glass surfaces.

The façade components developed by Fraunhofer researchers in collaboration with the Department of Textile and Surface Design at Weissensee School of Art, Berlin, respond autonomously to sunlight and its thermal energy.

“We don’t need any power since we can rely solely on thermal energy to control the façade element,” says André Bucht, researcher and department head at Fraunhofer IWU.

The demonstrator is based on a concept by design student Bára Finnsdottir, and consists of a matrix of 72 individual fabric components shaped like flowers. Each textile module has shape-memory actuators integrated into it; thin 80-millimeter-long wires of nickel-titanium alloy that remember their original shape when exposed to heat.

When the façade heats up due to the sunlight falling upon it, the wires are activated and noiselessly contract to open the textile components. The exposed surface of the façade is covered and sunlight can no longer penetrate into the room. As soon as the sun disappears behind a cloud, the components close again so that the façade is transparent once more. This effect results from a special lattice arrangement in the material.

Designed for large expanses of glass, the sun shield can be attached either on the outer layer of glass or in the space between multi-layer façades. The innovative structure is easy to retrofit and comes with a range of design options, allowing you to choose the pattern, shape and color of the individual components.

“For instance, you might want to replace the circular design with triangles or a honeycomb arrangement. You can also control the level of sun exposure for individual sections of the façade – just the top left area, for instance. What’s more, the membrane even fits on curved areas of glass. We’ve reached the point where the design has become independent of the shape of the building,” says Bucht.

Going further, the researchers want to collaborate with industry partners to develop a range of prototypes for private and office buildings, with the intention of testing them long-term on a detached house and on buildings at the institute.

According to Bucht, the plan is to have versions for new builds as well as variants suitable for retrofitting onto existing buildings. The goal is to ready the systems for market launch by mid-2017.

Other plans of the research team include: climate functions for the façade element, for instance variable heat insulation; coat the flower fabric components with malleable, organic solar cells in order to generate electricity that can be used within the building. 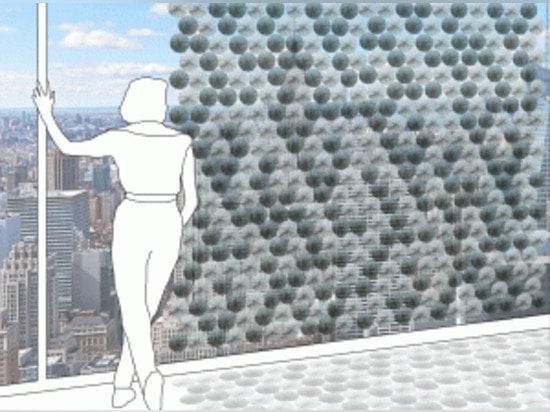