In the race for alternative fuels to reduce greenhouse gas emissions, Volvo Construction Equipment has once again stepped up its game – announcing it is testing the world’s first hydrogen-fuel cell articulated dump truck.

The prototype Volvo HX04 is not the only first for the company when it comes to articulated haulers. It invented the world’s first ADT in 1966. The truck was given the nickname “Gravel Charlie” and was developed at the company’s facility in Braås, Sweden. That’s the same place Volvo is developing the hydrogen hauler, which has been given the nickname “Electric Charlie.”

For the prototype’s design, Volvo focused on hydrogen-electric fuel cell technology developed by the company FuelCell Sweden AB. The fuel cells create electric energy and heat using hydrogen fuel, and oxygen from the air. Instead of plugging the machine into a charger, the hydrogen and oxygen combine to create electricity and heat.

Fuel cells capture the chemical energy from hydrogen and oxygen while they react to form water. The released energy is used to power the truck. The only emission is clean water released as vapor, Volvo says. Heat from the fuel cells can also be used to heat the cab.

The six-wheel prototype hauler weighs 35 tons and can be filled with 26 pounds of hydrogen in 7.5 minutes, Volvo says. It can operate for four hours before needing to be refueled.

“Vehicles with fuel cell electric powertrains have an uptime, range and fueling time similar to that of combustion-engine powered vehicles,” Volvo says.

The HX04 fills up at a hydrogen refueling station installed by Shell at the testing area.

The prototype is the culmination of a four-year research project involving Volvo and partners funded by Swedish government agencies.

The prototype and its testing will provide insights for future production, Volvo says. Commercialization of hydrogen-powered machines is expected during the second half of this decade, the company says. Volvo has set a goal of achieving “net-zero value chain greenhouse gas emissions” by 2040. 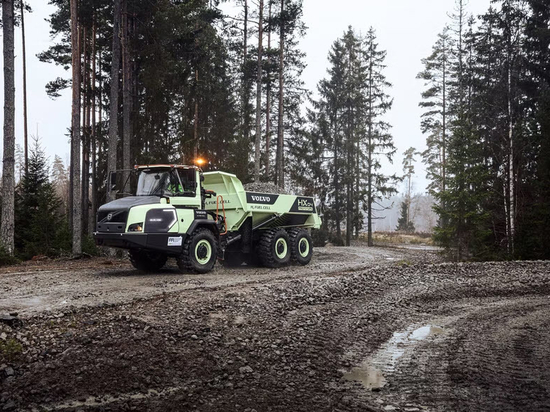