Sound insulation and vibration isolation in the music theatre in Linz, Austria

The city of Linz continues the tradition of being able to show the audience a repertoire of operas available today in the new music theatre at the Blumau planned by London architect Terry Pawson. Due to the size of the stage, the large capacity and the top acoustics, the building is also attractive for international stars and guest productions.

In the planning and implementation of music theatre, the conditions at the site in particular had to be considered. The route of the mini-subway line built in 2005 runs directly underneath the new building. The day and night operation of rail vehicles weighing up to 40 tonnes sent vibrations through the building which had to be minimised with appropriate measures. With this in mind, a concept was developed by the manufacturer, BSW, in cooperation with the planning office, which foresaw that to build the spacious forecourt of the music theatre, a tunnel would need to be built over the railway line and the outer walls of the building would require vibration isolation.

The proven product, Regupol PL, was used based on the technical solution developed. The vertical decoupling and use of the plate-shaped, soft elastomer ensures that there is no interruption to concert performances by vibrations from the subway line. The 50mm thick insulation mats, made from PU-bonded rubber fibres, were glued to the previously prepared concrete surfaces. The subsequent laying of dimpled membranes on the Regupol plates or additional thermal insulation panels on the building’s exterior wall protects components in contact with the ground from moisture by backfilling the excavation.

However, it was not only sounds arising from the outside that were taken into account in the planning and implementation of the Linz Music theatre. As usual with opera houses of this sort, the new building on the Volksgarten also has workshops where sometimes very elaborate decorations and costumes are made. Based on the acoustic requirements for the workshop areas adjacent to the concert hall recorded by the BSW consultants and their Austrian trading partner, Franner, the monolithic screed plates for the carpentry, metalwork and upholstery workshops and the props and painters’ hall were fitted on Regupol BA insulating screed sheets to reduce the sound transmission. The benefits of using these elastomer sheets with supervisory approval are their minimum compressibility, high resilience, high load capacity and high impact sound reduction of 26 dB. 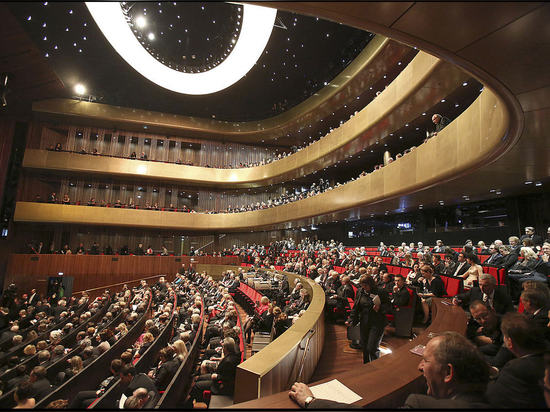