Intel described an ambitious set of plans for the convergence of High-Performance Computing (HPC) and Artificial Intelligence (AI) at the launch of the Supercomputing 2019 conference in Denver on Sunday, including the introduction of its first exascale GPU called Ponte Vecchio.

Ponte Vecchio will be a general-purpose GPU designed for HPC modeling and simulation jobs, as well as AI training. It will be manufactured on 7nm technology and Foveros 3D and EMIB (Embedded Multi-die Interconnect Bridge) packaging. It will have high-bandwidth memory as well, Intel said in a blog.

Intel also launched a oneAPI initiative to deliver open programming to developers on the architecture of their choice. OneAPI is designed to lower complexity for developers seen with multiple programming languages and tools. It is based on open specifications.Initially, oneAPI beta will focus on Intel Xeon Scalable processors, Intel Core processors with integrated graphics and Intel Field Programmable Gate Arrays (FPGAs). Other hardware support will come in future releases. Developers can test drive the tools at Intel’s web site.

Intel said its oneAPI plans and chips will lay the foundation for convergence of HPC and AI workloads at exascale in the Aurora system at Argonne National Lab. Aurora will be the first U.S. exascale system to use all of Intel’s portfolio, including two 10nm-based Intel Xeon Scalable processors (code-named Sapphire Rapids) and six Ponte Vecchio GPUs. Aurora will support 10 petabytes of memory and more than 230 petabytes of storage. The Cray Slingshot fabric will connect nodes across more than 200 racks. 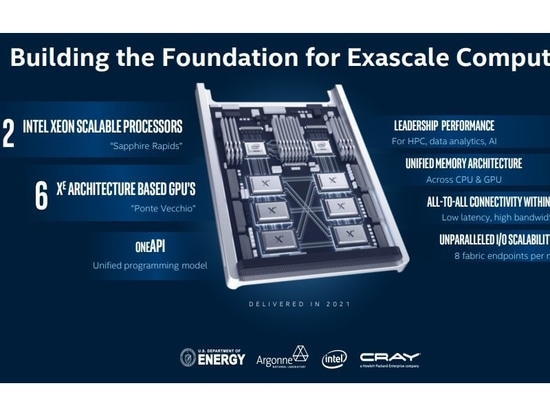 Intel said the Aurora system at Argonne National Lab will have six of the 7nm exascale Ponte Vecchio GPUs. (Intel)